First off, I should appologize for yesterday’s post. It did not do the show justice and it did not do the weekend justice. It did need to be written before I write this post. All the street cred I earned by being a hipster at Pitchfork is about to be ruined. I wanted to at least let the world know that I do have good taste in music and self respect.

So here it goes…

Tuesday night I went to the American Idol concert. My aunt, sister, and brother-in-law, and I all went to the show. I was invested in this season of AI. 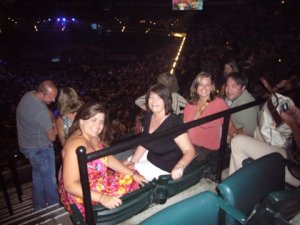 Our office conducts a pool to predict the winner. I lost miserably. I had Michael Johns going all the way to the top. By week 3 my dreams were crushed. Like the celebrity fantasy league (where I’m in 4th), this is the kinda sport I can get behind.

We’re at the concert. It was actually pretty enjoyable. Each of the top 10 contestants sang three songs. I conveniently took my bathroom break during Ramielle’s songs. I should also note she was wearing some very strange tight shirt/pants with bedazzled rhinestones. I also wrote some emails during Kristy Lee Cook’s patriotic, “I’m Proud to be an American” song. I can do without forced patriotism.

I have to say, Michael Johns was fantastic. Jason Castro (or Jar Jar Binks as the work ladies call him) was absolutely enjoyable. I’ve always liked Brooke White, it was solid. Carli was very good as well. She looked fantastic too. Seyisha totally got her boobs done. I’m not kidding. She is a DIVA now.

Look at that. Those were not there during the show.

I hate to say it, but I didn’t hate David Archuletta. On the show, I DID NOT ENJOY HIM. I think I just didn’t like when he talked and everything was so “inspirational.” Then the idol himself David Cook performed. It was blissful. 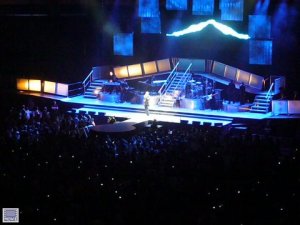 Here’s Michael John’s rousing “We are the Champions”

This is Jason Castro’s really good cover of “Crazy.” 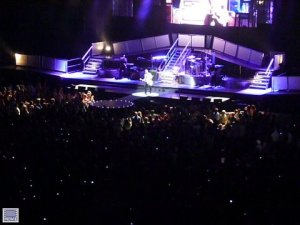 David Cook is about to blow your mind here.

So yes the show was good. I would have loved it if the show was only, Michael Johns, Jason Castro, Carli, Brooke, and David Cook. Who knows, I might be willing to watch Archuletta.

Here are some photos from the show 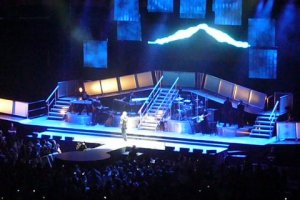 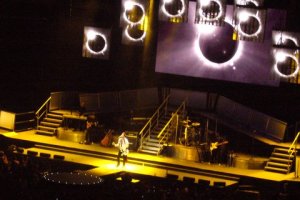 So here’s where the fun begins.

As we’re exciting Conseco Fieldhouse we pass a bunch of people standing along a gate outside. The security guard says that they’re waiting for the Idol to come out and sign autographs. What the hell, we’ll stay for a bit. Brother-in-law and Sis secure a good place near the gate obscuring the view from all the little children behind us. 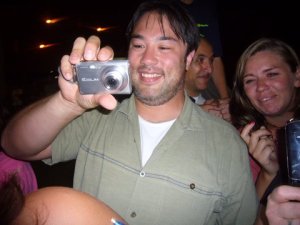 After waiting an embarrassingly long time, the Idol emerged from wherever they were. First was Kristy Lee Cook. She just ran right past us on the side.

Jessie (the bro-in-law) was PISSED. “You suck Kristy!” Luckily, she made her way back down the line signing everyone’s stuff. Not only did she sign Jesse’s paper, but they high fived. Carrie, the sister, bet that he wouldn’t do it, but he succeeded. This continued with all the idol! Yes, that’s right all of them. Jessie managed to get all of their autographs for little unborn baby Brody. This was his first concert after all.

Here’s sexy Mcsexy Michael Johns. When he came back around for the autograph he and I actually talked. It went a little something like this.

Me: You were the best. Seriously (true statement)

MJ: Nah, there were many others better than me. “Mamma, ooooooooh.” [that’s him singing]

But I did. Ok, I sound like a loser preteen here. that’s ok, I accept it. He really was my favorite! He’s Australian. Who can blame me. 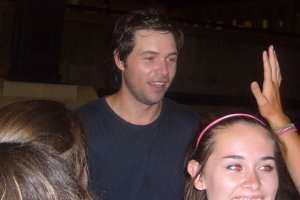 Ladies… Am I right?

True confession, when the crowd said, “Here comes Micheal Johns,” My aunt, Carrie and I all go. “ahhhh Micheal Johns.” Then we looked at each other and laughed because we were acting just a bit ridic. but whateves!

The best part of the night was hearing all of Jessie’s quotes. He was very into it. He was saying things like, “Hold your ground, those little kids are trying to get around you.” 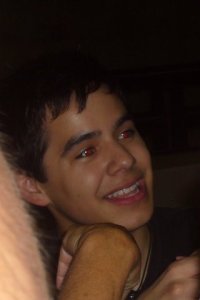 Jesse: Dude, I want to be you. See how all these girls are. You’re so lucky.

I LOVED IT! I WAS OBSESSED WITH STAGE DAD. 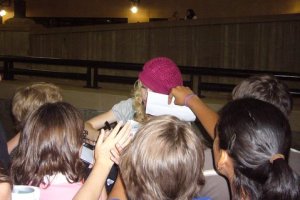 Jesse: Brooke, you’re just a real sweeting you know that.

Then, the american idol, David Cook came out. I had plans to invite him over for a game of Scrabble and all night secrets. Unfortunately, I didn’t get to pass along my plan to him. But I did get this amazing picture.

I have honestly never laughed as much as I did that night. Jesse was cracking me up. He was loving on all of them. I just kept stepping back and realizing how ridiculous it all was, but frankly that’s what made it so fun!

Moral of this story.  I would do it again in a heartbeat.

One thought on “Judge Away”